Weeds grow faster than the fruit. I tilled up ground for an autumn garden and I have to till or hoe again, just a few days later, because there are weeds filling the ground. I was not able to plant seed and have it mulched when I tilled it due to not having the proper seed I needed at the time. Now, a week later,  I have to deal with the weeds. Again.  It is amazing how fast clear ground can turn into an overgrown mess.

If you have experienced the wonders of planning a garden, having a picture of what it would look like, and having expectations of the garden every neighbor would be in awe of, you probably also realized that these do not just happen or naturally grow on their own. Weeds and grasses do, however, grow abundantly without being planned or planted. It seems as though weeds do their thing without anyone lending a hand. I have another perspective however, to add to the weed’s abundance. We do have a part in the growth of weeds, more than we know or want to admit. I cleared the land, leaving fresh, soft, fertile, soil. Everyone I know loves to put their hands or feet into fresh, clean soil, and stay a while. The soil has been tilled, meaning, the top layer has been broken and the lower soil brought to the surface. What was on the top? Weeds, plant matter, old mulch, all turned under.  Point: there are always weed seeds, and weed matter, in the soil.

Our lives are wrapped up with pulling weeds and planting seeds. We can produce weeds of selfishness and lies, or fruit of love and service. The Messiah said the soil of our hearts is the most valuable acreage on planet earth. We have to tend to it with pulling weeds and weed roots, planting good seeds, and growing fruit that can be harvested for many. 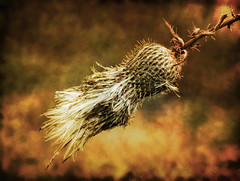 Weeds can squeeze the life out of a garden, especially brier, thorn vines.  In life we call these the worries and anxieties of the world, and the desires for other things. These weeds have the potential to multiply. Several people I know are struggling with the “what am I supposed to do? Who am I supposed to be?” They are falling into the trap of comparing, looking to other gardens, and trying to live there instead of where they were planted. Just one weed, like a dandelion, has unnumbered seeds, and if we let just one weed grow freely, the result can be devastating. Dealing with allergies from a tick, alpha-gal mammal allergy, I have had to be very proactive, and tend my body with more care than I ever have. I have always been healthy, eaten well, and stayed active, but I am now more tuned into every detail of what goes into my body and mind. I have struggled with emotions, imbalances, and triggers from the allergy, but this allergy has revealed more about myself internally than I ever would have known otherwise.  I have experienced releases I may not have ever experienced, in deeper ways than I thought I could go. I had more in me than I would have ever guessed.  I hate this allergy with a passion, and I am actively pulling at it to find its core.

I read in an article that weeds left unattended can cut a harvest by as much as 40-60 percent. We have to be very intentional and serious about pulling and tilling under the weeds of destruction.

I will post an article on the pruning process and the mulching process, because it fits so well with weeding. It is all about keeping the good plants healthy and strong, and using the weeds for good.

This site uses Akismet to reduce spam. Learn how your comment data is processed.