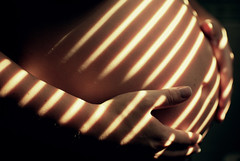 “Watch your language! The fetus can hear you.” This statement is often spoken, but for most, it is a joke statement. I believe this statement to be true. When I was pregnant with my first child, I often noticed movements of my baby were easily matched with different music, sounds, or people in the room. After birth, I noticed the same synchronizations. After birth, I know from observation, that my baby understood what I was saying, who was in the room, and what music was playing, by tone and by words she recognized from the womb. How can a fetus hear anything if it is muffled by the womb? How can a baby, after being born, resemble the fetus it once was in the womb, remembering all that it learned while there?

While someone yells a word above water, someone under water can hear the number of syllables, and the accent the word was spoken. This is similar to what the fetus hears in the womb. The fetus responds to many high pitch sounds, loud sounds, rhythms, and the mother’s voice outside the womb. Research has shown that the fetus can detect small differences in sound patterns, for example, “babi” or “biba”, or a familiar music to an unfamiliar music.

The womb prepares a baby to understand and relate to the world outside. Infants can make sense out of chaos as it moves from one world to another. Crying, for example, has been linked directly to being active listeners, not just to needs. Touch to sound recognition is a key element to bonding and attachment to the outside world. Research has found that as early as infancy, babies can be given sound choices and they will have a distinct choice related to the womb sounds heard. These are just a few of the fascinating survival connections from womb to birth making infants are born ready to find human faces, imitate human actions, and process bits of human language. 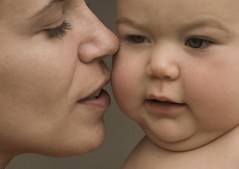 We all have a predisposed nature to notice features of the being like ourselves, but we tend to think that hearing is somehow different, and language has to be taught or it would never be spoken. Decades of research has confirmed newborns can quickly identify their mothers through sound of voice and smell of the milk. Newborn milestones have a new respect for what babies do, and how they come prepared to learn language. Language, focused attention, must come from the care giver. “Hidden in the everyday routines of parenthood are the shining moments that scientists have used to reveal the linguistic capabilities of fetuses and newborns. Babies do more than just notice us; they analyze what comes out of our mouths.”

Source: How Babies Talk: The Magic and Mystery of Language in the First Three Years of Life

This site uses Akismet to reduce spam. Learn how your comment data is processed.